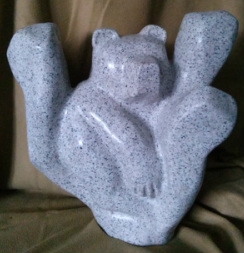 Granite stone sculpture measuring 10 x 16 x 18 inches and weighing 80 lbs. The rough stone was personally quarried from an area near the Skajit River close to Hope, British Columbia. This carving was inspired by the many black bears that frequent the area and the presence of the Devil's Club underbrush that grows wild on the mountain sides.
Suggested Retail Price $4000.00 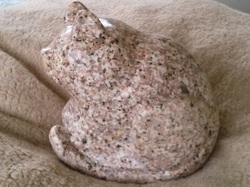 This Granite sculpture measures 10 x 7 x 10 and weighs 33 lbs. The river boulder was collected from Suicide Creek  near Mission, British Columbia. The pink white grey and black speckles glisten like the clean shinny coat of a cat and the silky soft smoothness of the stone encourage soft petting. Suggested Retail Price $ 1575.00

Granite Wall Mount Salmon. Dimensions are 24 x 12 x 4 inches and the weight is 29 lbs. This sculpture is made of granite that was collected in the Norrish Creek watershed, near suicide creek in Mission, British Columbia. It is a naturally formed mixed composite rock with the head a grey, high carbon granite and around the gill area the main body is slightly pinkish in tone as it is speckled with feldspar, quarts and mica. The back of the fish has a large cup / slot cut out to allow for secure mounting to a wall or it can be beautifully displayed on a fireplace mantle piece or simply set upon a strong shelf. Suggested Retail Price $1500.00
Monkeying Around
This work particular work in progress is a grey colored granite bear cub standing and dancing. It is currently rough cut and is displayed for the photo while wet. (covered with water) The sculpture is 5 x 4 x 14 inches and weighs 17 lbs.  Suggested Retail Price $1600.00

Giant Grizzly Bear
This glacial boulder was deposited near Stave Lake just outside of Mission, British Columbia millions of years ago and back in the 90's it made its way into the arms of the sculptor. BCTV, a local television and broadcast station created and aired a three part documentary series about Police Artists and featured Paul MCCARL . The documentary showed footage of Paul working on various carvings, several finished art pieces,  and in particular his quarrying activity and the selection of this boulder as he described his vision to the TV Crew and audience. The 12 ton boulder was subsequently delivered in the bucket of a D-9 Loader to his residence in Abbotsford were it underwent the transformation and over 1200 hours of back breaking labor. The bear has been moved three times since it's initial recovery location and it is near complete. Paul will spend the next couple hundred hours cutting hair into the rock, and the last carving activity will be to highlight the claws, ears and muzzle after which the eye lids will be undercut and the eyeballs water polished. A magnificent sculpture such as this will be valued at about a 100 K.