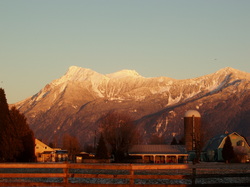 I would like to thank my mother, father and of course God for my life, health and all of the positive influences which I have received during my existence and for all of the encouragement and motivation, as provided by those who have shared their love of life with me. They include but are not limited to my family, friends and all of those whose life paths I have crossed over the past 60 years.  I wish to especially acknowledge my immediate and extended family members who through their thoughts and actions have provided me with the inspiration so that I could grow spiritually at my own pace, build on up my skills while expressing my artistic freedom and focus on my stone sculpting abilities.

Throughout my life I have been taught to always make time to appreciate the wonders of life. Looking up and contemplating the solitude of the moon, the millions of stars and glancing  downward to admire even the small sticks and stones that I walk upon, they each help to remind me of how truly small I am as well how extremely fragile and special life is. I have grown to be a honest, caring and somewhat patient person and this later trait is a necessity when carving extremely hard stones such as Granite and Jade. Over the years some of my Aboriginal friends have encouraged me to work with natural stones as these were believed by some to have been mankind’s grandparents. It is somewhat due to this bond and belief that causes me to so carefully remove the outer skin or shell of the rock and to expose the inner beauty and individuality of each stone.
Paul McCARL Stone Sculptures - A word about integrity, trust and professionalism 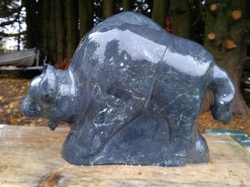 Several decades ago I was approached and asked to carve a granite Buffalo for a Vancouver based collector of fine art. We agreed upon size color and shape for the sculpture and I provided an estimate of the final products value and pricing along with an estimation of approximately six months, the time it would take to complete the project. I agreed to maintain contact and update the client as to the ongoing status of the carving progress and invited him to stop by the carving studio at any time. After about a month, I called to advise that a local stone had been quarried for the project and that I had started the carving process. Several months later I advised the client that I had encountered a problem with the shape and three dimensional viewing of the sculpture and that I was exploring a variety of options that I hoped would remedy the issue. Of note, a good artist can and should be their own most valued and honest critic.  I promised to finish the project and regrettably provided a new date for my anticipation for the sculptures completion. Almost a year passed by and after radical re-cutting of the sculpture, I finally accomplished closure of the carving project. Without any announcement I packaged the sculpture and had it delivered to the client’s office. I included a brief note of apology for the delay and asked that they examine and enjoy the carving for 30 days after which if they still liked the art piece, to either send me the money or return the carving COD in the custom built shipping package. Upon receipt of the correspondence and package, the client called me out of excitement and advised that after opening the large heavy package and having read the letter, he was delighted and expressed complete and total satisfaction with the stone carving. He commented on the high level of trust that had been bestowed upon him with the unexpected delivery of his carving and after all there had been no deposit or exchange of monies. He indicated that he loved the sculpture and immediately sent the original agreed upon funds.

Years back and while I was participating in a fund raiser initiative with the CNIB, I had occasion to meet with representatives of a CNIB Committee and a very polite young  boy who had been without sight since birth. During the encounter and after verbally describing the carving process, I was given opportunity to present a 40 pound bear carving to the young boy for his examination. As he touched and felt the jade carving he described the sensation commenting not only on the shape and weight of the item but also of its incredibly soft surface. It was his first encounter with this type of fine art and as he gently caressed the sculpture he commented further on the fluid lines of the piece, its solid texture, the carvings smooth finish and the absence of any rough edges, grooves or tool marks. He also described something that I had never before noted as he identified thermal considerations and temperature of the piece noting that the paws and feet were warmer than the legs, which were warmer than the head and neck and the main body was the coldest portion of the sculpture.  He enjoyed touching the bear cubs head and explained that the bear’s muzzle and ears were so much warmer than the rest of the body. He enjoyed the encounter and was immediately introduced to other stone carvings of whales and a variety of small birds. A jade stone carving of several killer whales swimming in a pod was later donated to the CNIB for their fundraiser. 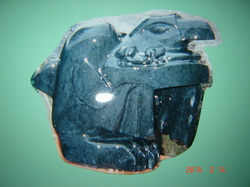 Several years ago I created a transformational “Dream Piece” which was a combination of an Indian Headdress and a Compressed Totem Pole and it was on display in a local Vancouver Art Gallery. The carving was a three dimensional center piece and appeared as if a giant globe in the shape of an Indian Headdress. It consisted of a harmonic blending of a whale, eagle, owl, salamander, sea crab, salmon smolt, a black bear, a mighty buffalo and a tree frog. The entire piece weighed 120 lbs and rested on top of a life sized bear paw. While on display a couple of visiting tourists approached the gallery curator and asked if they could return a small sculpture which they had purchased the previous day and apply the value towards the acquisition of a large jade sculpture entitled “After We Are Gone.” The sculpture and the accompanying written authenticity description along with its interpretive story, had struck the hearts of the visitors and necessitated that they acquire the sculpture as for whatever personal reasons it had reminded them of their mother. Needless to say people need to be happy and the carving was packaged and taken to a very good home!
Paul McCARL Stone Sculptures - Special Events and Donations

This carving was created and later presented to the Clarke Group of Mission for an NHL fundraiser which was held in Surrey, British Columbia. During the weekend events the carving was ultimately auctioned and subsequently purchased by NHL player Robert Neil "Bobby" BAUN. My memories of collecting the stone boulder, creating the sculpture and later presenting it to this legendary hockey hero will never be forgotten.

Stone sculpture named "Fraser River Bears Fishing" was carved from a 4 foot chunk of black granite that was located on a washed out mountain road near Chilliwack lake in British Columbia. The rough stone resembled an elephants tusk and weighed close to 200 pounds. The rock was collected and returned to the artist's carving studio where it underwent its transformation.

Fraser River Bears Fishing, carved from the above noted piece of black granite
Dimensions 44 x 9 x 8.5 inches, weight 78 lbs.
The finished sculpture was also released through the Clarke Group as a Hockey fundraiser and the Griffiths family acquired this magnificent stone sculpture. 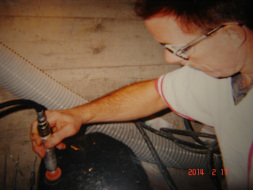 Not the same carving as was repaired
A number of years ago and please forgive me for being a little vague, but a local resident had contacted the Abbotsford Art Council in regards to having a "discrete" repair done to an authentic North American Aboriginal stone sculpture, one which was a prized family heirloom.  The piece had been inadvertently scratched and noticeably gouged out on the top of the head of a large Inuit hunter figurine. I subsequently met with the client and was appraised of the predicament after which I described the museum type repair that I would engage. I explained that I would core out some stone from the bottom of the sculpture, mix the powder and small chips with an adhesive and then fill the scratch and gouge, later sanding and polishing the repair so it matched color, texture and smoothness with the rest of the carvings surface. Arrangements were made to remedy the repair so that none of the other family members would notice the missing carving during a planned single day repair. Since the actual time consumed for labor during the repair was very minimal, the greatest  amount of time expended was waiting for the repair to sit and harden, therefore I decided not to charge anything for this community service repair and I simply returned the carving. I later discovered that I had truly been rewarded when I found a very special thank you card, some wine and received a heartwarming telephone message of thanks from the owner of the repaired bumped head figurine! These gifts of thanks will be remembered forever in my mind and significantly outweighed any financial reward that I could have asked for.